Never a more honourable or gentle man will you meet. 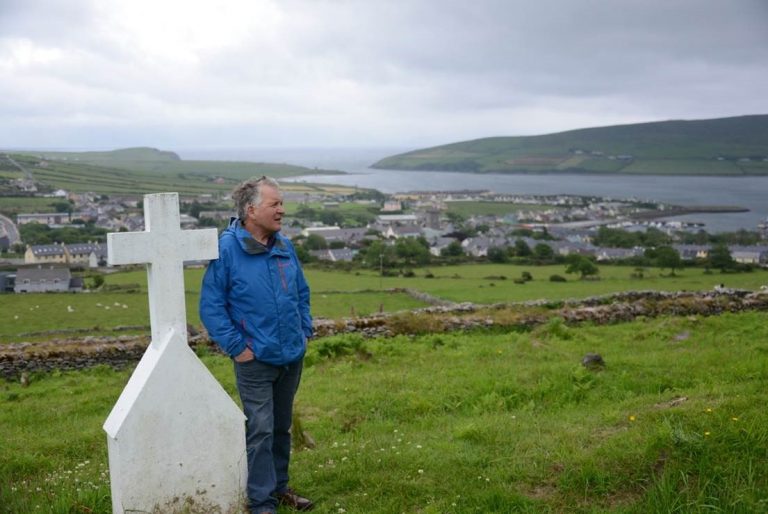 Looking back on my childhood, it seems that nearly everyone I knew had a song or two or could play a few tunes on the `box’ if called upon. Songs were often strongly identified with a particular singer, I remember Thady Flaherty, an old man and a great singer. I was no more than ten years old when I first heard Thady sing Róisín Dubh, but I will always remember it.

There were some very fine traditional singers, musicians and seanchaithe in the district at that time (and there still is, thankfully) who were known throughout Co Kerry and far beyond it. My own father, Tom Scanlon, was recognised as a fine speaker of Irish and a noted seanchaí. He had that agility or nicety of speech that he inherited from his ancestors and which was highly prized among the old people. It brought frequent visits to our house by Irish scholars and academics from Cork University and other places of learning in those days.

Of course, we had songs in English too, in my boyhood, some traditional and a few modern songs. These later came from ‘the wireless’ which was coming into some houses around that time, but mostly from our own people coming home on holidays from England and America. Raidió Éireann (now RTÉ) and Radio Luxemburg were the two stations we listened to when we had the time, but there was very little Irish to be heard on-air then if I remember correctly. It was only in later years I began to understand the true situation the Gaeltacht people found themselves in – small isolated communities, their young people leaving and under moral pressure from language enthusiasts to hold fast to the language. Yet there was very little practical support from the authorities then in comparison to what is available now, to fight against the influence of creeping Anglicisation.

Today, however, it is everywhere acknowledged that traditional music and singing and especially the language itself, are essential to our self respect and identity as a small nation. And isn’t it great that songs are being written again in Irish? After being ‘uncool’ for so long, the language is fighting back and even recovering lost ground in daily life.

In the seventies, when I left school, there was very little opportunity to earn a living at home and, like many more young people at the time I had to bid farewell to my native place. After some time working in various parts of Ireland, I set sail for London to join two of my brothers there. It was in London sometime later that I met and married my wife, Marie. After some years in London the urge to travel came over us again but this time we decided to break with tradition and head for Australia. We arrived in 1981 when our first son Paul, was only five months old, and although we struggled for a while as most migrants do, we soon came to grips with the ways of our new country. Our second son Sean, was born here in 1989.

There is an obvious Irish influence in Australian traditional music, even if folk music and the bush song tradition seem a bit marginalised these days. This is a pity because it’s from these songs I learned about the penal and colonial days, the life of the pioneers and the sad history of the Aboriginal people. They appealed to me from the start and it was that I think which first sparked the interest in the songs and history of Australia which I still have.

I wasn’t long settled in Epping on the outskirts of Melbourne when the chance came to re-connect with my beloved Irish language, something I had missed very much. A newly established multicultural radio station was looking to get an Irish language group together and as a native Irish speaker, I was invited to be a part of it. Starting from broadcasting to the Irish speakers and enthusiasts across Australia once a fortnight we were soon having regular weekly gatherings and the group was growing from month to month. Because of the number of new people coming who wished to learn the language we formed The Irish Language Association of Australia – running regular weekly classes at all levels and an annual residential summer school (Daonscoil Victoria as it is called). Upwards of 45 people attend regular classes throughout the year and many more at the summer school from all over the country. Our problem these days is the scarcity of native/fluent speakers to help carry the administrative and teaching load.